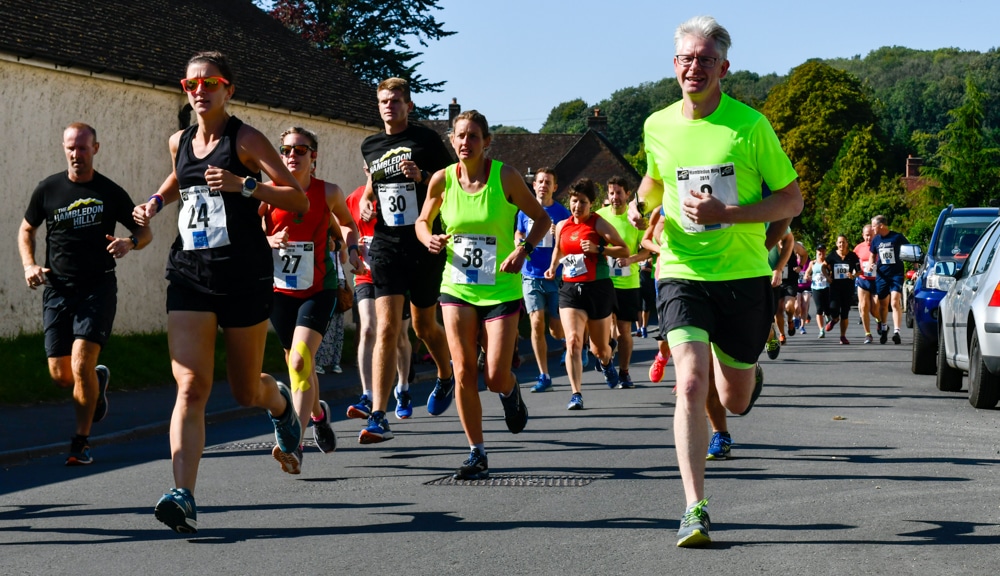 Eliud Kipchoge might have broken the two-hour marathon barrier in Vienna on 12 October, but he’s still yet to the conquer the gruelling Hambledon Hilly Run course. Even the promise of a free-race t-shirt and a Hartridges soft drink has yet to attract the Kenyan long-distance runner to one of Hampshire’s most scenic and welcoming villages.

The fifth Hilly event on 21 September 2019, was especially hot with habitual winner Julian Manning unable to get near his own course record. Like Roger Federer in his Wimbledon pomp during the last decade, he still looks unbeatable.

Sarah Zacal is the latest ladies champion after finishing in a hugely impressive 49 mins 38 secs. Former champion Celia Fox-Robinson was just 52 seconds behind.

A new trophy for the first lady in the 60+ category, was presented to Jacqui Hands in memory of the much missed Hambledon villager Jo Thompson. Michael Stares earned the Gordon Birdwood trophy once again as the oldest competitor in the race.

For many, the highlight of the event is the Mini Hilly up on the National Trust protected Speltham Down. Nearly 100 children took on the steep and challenging 1km and 2km routes with some of the more vertical sections near impossible to run up.

Thanks to all the runners, supporters and volunteers for making the Hambledon Hilly the great event that it is. A special thanks to our key sponsors de Mellow & Co, Hartridges Soft Drinks, Hambledon Vineyard, Rebalance Pilates and The Country House Company. Thanks also to the Friends of Hambledon, who provided the fantastic food and refreshments. We look forward to seeing you all again in 2020.